The artificial islands of Dubai

By BBIH12 november 2013No Comments

Seeing that the income of gas and oil will stagnate in the coming decades, Dubai wanted to earn more money from tourism. Therefore they have been building insanely luxurious hotels as well as artificial islands to spark the interests of the rich and famous. To successfully complete their projects, the Arab developer Nakheel hired some foreign companies to help them.

The Netherlands are well known for their cheese, flowers and coffeeshops, but in this article we elaborate on their ability to build on water. For centuries the Dutch have proven to be able to withstand tremendous amounts of water and very bad weather conditions. The companies that specialize in on-water building are very successful and hired all over the world. The best example of this would be the islands of Dubai. 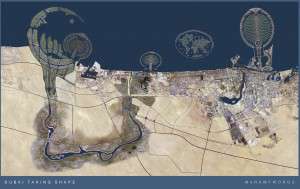 Two of the artificial palm islands (Jumeira and Deira) were dredged by Dutch company Van Oord, the other one (Jebel Ali) and the waterfront are taken care of by a Belgium dredger company. The Arabian company Nakheel is in charge of the developments of the islands.

Jumeira Island was the first to arise from the water. Its size is 5 square kilometres and it has a ring around the “leaves” to break the waves. This ring was dredged by the Dutch company Boskalis, the actual palm was dredged by Van Oord. On this ring, a 5 star luxury hotel was built, Atlantis the Palm. Even though its status might not be like the Burj al Arab, its location is quite incredible and it has a water park, AquaVentures. If you want to be even closer to the sea, you can stay in the Queen Elisabeth 2, a cruise ship that turned into a hotel. Additionally, there are 2000 apartments and 1500 villas on the island.

The Deira Island, which is not yet completely finished, will be the biggest man-made island ever built. Nakheel, which was taken over by the government as part of a $16 billion rescue plan completed in 2011, will change the manmade island group’s name to Deira Island from Palm Deira, chairman Ali Rashid Lootah told reporters on the sidelines of Dubai’s property exhibition show Cityscape. Deira Island will have about 1,400 retail units and restaurants including a night market, plus a 250-room hotel, a 30,000 capacity amphitheatre and other attractions.

The waterfront is all together even bigger than the Deira Islands, but it is split up in several smaller islands and wave breakers. 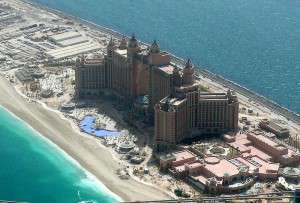 Maybe the most difficult island to build was the one representing the world. Imagine the precision necessary to dredge all the continents properly! Dutch dredging company Van Oord managed to pull it off. They must have been quite bummed when they found out Nakheel was unable to pay the bills anymore due to the financial crisis, which led to a stop in developing the islands further. Currently, the island is for sale, but it comes with a fitting price tag: $28.6 million. It is also possible to rent the islands. Imagine throwing your birthday party in your entire country on an island! 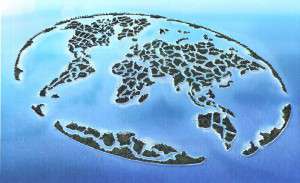 Even though Nakheel took a huge hit during the economic crisis, they are planning to continue and finish all projects they begun. After the $16 billion dollar rescue plan the government initiated, the development company is finally ready to start planning the restart of the projects. Next year all of the projects will continue, but due to the high costs nobody knows when it will be completely finished.