Mountains, constructions that lots of countries have in their possession, which are created by mother nature over the course of millions of years.

Having access to altitude is really an additional value to a country. Many countries that have mountains are using them to create revenue via skiing or building very beautiful villages. People can use these possibilities in their spare time to enjoy and to release their rush and pressure from their daily life. The possibilities are endless! 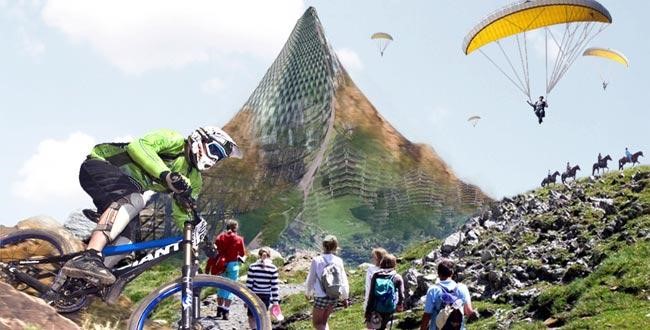 Unfortunately, the Netherlands is one of the few countries who do not have mountains. Why wouldn’t we just build one ourselves then?

What started as a joke became serious due to the positive reaction of the inhabitants of the Netherlands. The person behind this idea was so surprised by the crowd that he had visited 6 engineering companies to ask for cooperation. The idea is great but the execution will be a real hassle considering the trillions of tons of ground movement that have to be conducted plus the price tag of approximately 200 billion Euros.

Imagine a mountain in Holland, imagine all the possibilities! Activities such as mountain biking, skiing, paragliding and more! Take your convertible out of your garage and hit the road sky high! Think about picnicking with a horizon that will give you sleepless nights. Imagine the view, with such a flat surface of the Netherlands, the panoramic view will be insane! 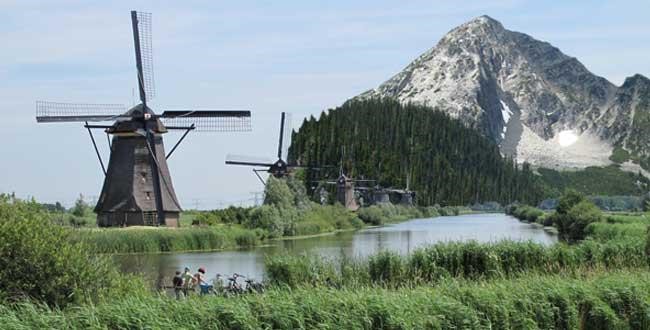 I think this is a great idea and it should be executed, but what are the problems aligned with this project? Real mountains for instance are made from solid rock which are attached on high density surfaces. When you are building a mountain on top of soft ground it is not a question ‘if it is going to sink’ but the question is; ‘how far it will sink’. Another problem with density is that when you are using soft materials to build the mountain, it will drain aside like a sandcastle made from soft sand.

Engineers were thinking about making the mountain hollow with metal constructions. The only problem is that the skeleton have to endure a lot considering the snow, trees, rock etcetera. Besides that, you are skiing on a surface which has a depth of couple of kilometers beneath, how does that sound to you?

My solution, which is inspired by ancient Egypt, is to build the mountain like a pyramid. Using square stones to build a gigantic mountain, it will be able to resist all weather conditions. If they were able to build that back then with only man power it will be definitely be easier now. Between the spaces of those bricks should be a kind of liquid substance which will hold the entire construction as one piece. Above all that will be a coating of earth, sand, metal and rocks to shape it like a mountain. Downside is that the costs will be quite high and the mountain might sink too low. Besides, the lands climate could change; it will get colder on top of the mountain and there would be an increase of rain and snow in the area.

This mountain would hold for many millenniums like the Egyptian pyramids.  It will attract many tourists and leisure visitors from all over the world. The investment and the return on investment will take a long time. However, the investment be returned because of incoming revenue of visitors during the decades. It will be all over the news and the investors will write history with the first man made mountain and hold the Guiness-book world record with the highest man made construction. It would become a landmark for the Netherlands just like the Eifel tower is now for France.

Let’s hope that this project will start very soon. The engineer who thought of this idea, said that it is only a matter of time when this will be reality.